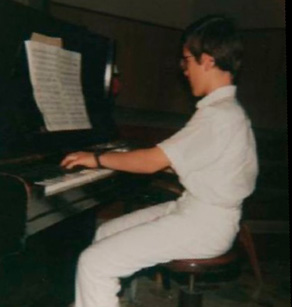 Born in Sicily, third of four brothers, Massimo begun piano lessons at the age of 5 fuelled by his father’s passion for music. Learning came naturally and easily, allowing him to advance at a fast pace and begin performing publicly at the age of 7. Always referred to as “an old soul” by his teachers and family Massimo begun to shine on the keyboard by performing beyond the technical aspects of music and expressing a deep emotional understanding of the instrument.

Throughout his teenage years pressure mounted as a result of balancing college and music studies, imposing a sense of commitment and responsibility towards future goals and ambitions. It was in between maths, Italian literature, latin, physics and countless hours spent with Bach, Czerny, Chopin and Hanon that Massimo made a musical discovery that shaped his future forever. Whilst studying he caught a faint sound in the house; his older brothers were listening to music by George Winston. Warm, emotional and simplistic music that felt so unfamiliar compared to the classical world.

Very quickly he begun to play Winston’s music by ear and shared his discovery with his music teachers. Sadly the exciting news was not welcome in a schedule of specifically structured studies and he was advised not to derail his career. After a few months of obedience, during a summer thunderstorm, Massimo got caught by his emotional conflicts and whilst getting lost in the view from his music room begun playing music without even realising it; new music, new style but charged with the old emotions he had been carrying for years that were not shared with anyone.

In secrecy, he begun composing his own music from the age of 14 for many hours after his classical studies and even though many public performances and classical competitions followed (including recognition from UNICEF for his charity performances), his obsession with his compositions kept on growing.

In 1995 he moved to Messina where he met Pippo Mafali, an older and well established musician at the Conservatorio di Messina, who injected a deep sense of purpose into Massimo’s ambition. This combined with the knowledge of his father’s success in Australia in the ‘60s pushed Massimo to move to England and begin a new chapter of his life.

Resident in the UK since 1998 he faced similar language and financial challenges as his father did in Australia. Despite these, Massimo established solid foundations and avidly acquired knowledge and experience on orchestration, music technology, music history and contemporary composers. He dedicated all his resources on the founding of the “MN Studios” in Oxfordshire from which he now composes and operates.

Between concerts and session recordings Massimo works on a large number of personal orchestrations and since 2011 he has been producing music for corporate and movie productions; most recently the documentary “Madam & the Dying Swan” and an upcoming National Geographic mini series due to air at the end of 2016.

Despite the many interruptions to the process, Massimo is also completing the release of his piano solo album “Pensieri”, an emotional journey through his difficult years that also features the very first piece of music he composed at the age of 14.  A lauch concert took place in 2015 and pre release promo CDs are available by contacting him.